Does anyone remember Scott Stapp?  Or the band Creed?  I think it’s a testimony to the impermanence of this world.  At one point in time, I couldn’t listen to the radio without hearing a song by the band Creed.  The band hit popularity as I was exiting high school.  I bought the band’s first album, because it was on a mega-sale, and I was interested in it for some reason.  A song on that album spoke about a courtroom judgment, and the singer’s sins were on trial, and how he cried out for help above and saw a vision of the cross.  The song’s chorus was “Should’ve been dead on a Sunday morning, banging my head, no time for mourning, ain’t got no time.”  There are also a lot of cryptic words and language in the song, which really made the meaning incomprehensible to me, but it certainly seemed influenced by Christ and his death and resurrection for the sins of the world!

The next time I heard Creed, it was the song, “Higher.”  Clearly this one was about heaven;

it had to be.  But was this a Christian band?  It was too hard to tell.  I didn’t hear the name of Jesus in any of the songs, and God was never clearly defined.  I always sort of heard that they were a Christian band, but sometimes the actions of the lead singer that hit the news didn’t match what is typically considered Christian, especially for someone who is on such a public platform, especially the “sex tape” that came out that featured both Stapp and Kid Rock.  I never investigated the material in it or made much attention to it, but I’m pretty sure it emerged about the time the band broke up, and I always placed the video with the demise of the band.  I thought that maybe the other members of the band got fed up with Stapp’s actions, if they were all Christian.

Well from an article just published by Christianity Today, I discovered that Stapp was the only Christian in the band Creed!  And that the others in the band were the reason that the band wasn’t a “Christian” band, and maybe why Stapp wasn’t more vocal about his faith.  From the article, it seems that Stapp has come full circle, from alcoholism, physically abusing his wife, and overcoming and forgiving past abuse from his step-father.

He completely comes clean in a new memoir about his life.  As Christians, we might look at it as, why are you airing your dirty laundry, but many of us haven’t been in the public eye like Stapp – I mean, there was a time, when Creed might have been the most popular rock band releasing new albums, and for all intensive puposes, Stapp was the draw for the band.  His voice and lyrics led the direction of the band, for Creed it wasn’t as much the music that did the talking, but Stapp, especially since there was so much talk about the band being a “Christian” band.  I’m sure for Stapp, looking back at the drunkenness, sex tape scandal, and physical abuse to his wife, all of this really hurt not just his image, but the image of Christ!  And I think in this memoir, he’s really come clean and just saying, “Man I’m a sinner, like all of you, and all of us have a gracious savior, Jesus Christ.”

Stapp is now alcohol free for a little over a year, and Creed is back together.  It’s not the first time Stapp has been sober for this long.  In the Christianity Today article Stapp says:

A little over one year. I used to be very naïve about the fact that alcoholism is a disease, and that there are things I need to do proactively every day to manage that and prevent relapses. Prior to a relapse a year ago, it had been a year-and-a-half. And prior to that, it had been two years. It’s part of the disease, but all I know is that as long as I do what it takes every day and surrender myself to God, I’ll be OK.

Being involved in the program [for recovering alcoholics] has helped me rediscover my relationship with God, because in these programs, God is the center. Now they may call him a “higher power,” but I tell you, I needed a new foundation with God. I needed to throw everything out the window and start over. I’ve been humbled where I needed to be humbled. I was an egomaniac with an inferiority complex, and I needed to hit bottom.

Concerning the help, Stapp got from God in his battle with alcoholism, and I’m sure handling the fame he received from Creed, Stapp says:

God is the miracle heart surgeon, and he gives the best heart transplants in the world. There are no scars on the outside, and the scars on the inside just make us better Christians and help us help others. I really feel that I got the needed heart transplant, and now it’s just fresh and alive, full of love and grace and understanding.

Those guys have openly confessed their atheism and tried to distance themselves as far from God as possible. But I’m continuing to pray and believe in my heart that God put me with these guys for a reason. I hope my life and testimony will speak to them, that God is real. I’m praying for that.

Let’s pray that Creed can get back on top of the charts, that Stapp’s book helps people who don’t know Christ come to understand that Stapp though a Christian was just as broken as others and that God has forgiven him and restored him and has that in-store for all of us, and that Stapp’s life can show Christians that we’re not any better than the world apart from Christ in us, our hope and glory, and that we can mingle with non-Christians and still proclaim Christ and not be ashamed of sharing our faith, even when we are caught red-handed with our sins.  I think Stapp’s battle with alcoholism also shows our battle with sin in general, that we will fight, fight, fight, and win, win, win in the struggle, but then we’ll succumb, and we’ll have to repent, and it’s a vicious cycle that often continues for a very long time, and when one sin is finally put in the grave, God shows us the next sin in our lives that we had all the while we were struggling with the first sin, but we weren’t aware of it at the time.  God chips away at our sinful nature, one strike at a time, as he sculpts us into the image of his Son, Jesus Christ.

To read the article, “The Confessions of Scott Stapp,” click go here. 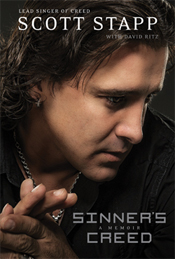