Habakkuk is crying out to God with the complaint that God’s people have struggled with through every age – and this is a struggle that won’t go away until Jesus returns and makes all things new – and that complaint is the problem of evil.  Why, oh why, does an all-loving, all-powerful, and all-knowing God allow evil?  Why does he let his people suffer? 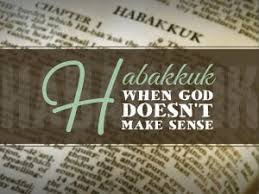 In our day and age, even those who reject the existence of God – ask this question.  In fact, many people who do not believe in God reject his existence, because of this very problem of evil.  They think if God is all-powerful and all-good and all-loving, he’d stop evil.  Since evil still exists, they conclude that an all-powerful God must not exist; he must be impotent.  Or, maybe he’s all-powerful, but he isn’t all good, maybe he is actually evil.  They conclude that an all-powerful, all-loving God does not exist.

Not knowing the exact details of the evil deeds in Judah at the time of Habakkuk works to make the text more relatable to us today, because we all can turn on the news, or read our social media feeds, and witness the evil and injustices that occur daily in our society.

Many of us have experienced evil and injustice against us and against our family, friends, and neighbors.

Many of us have also experienced suffering and pain that can’t be directly linked to specific sinful acts– such as a loved one dying of cancer or suffering from mental depression that can’t simply be stopped.

Do we usually get the answer we want from God when we ask why such evil and suffering is happening to us, to our people, and in our nation?  Probably not.

Habakkuk didn’t get the answer he wanted either.  In chapter 1 verses 5-11, he is told that the evil in Judah that he wanted the Lord to stop would be stopped, but that it would happen through God raising up the Chaldeans, a fierce, strong nation that marched through nations taking whatever they desired – their strength was their god.

Habakkuk can’t believe this answer – not at all.  Is God really going to stop the evil in Judah by having a more evil nation conquer his people?

In verse 13 of Chapter 1, Habakkuk wants to know why God sits around and looks at the traitors and remains silent when the wicked swallow up the man more righteous than he.  So he raises a second complaint to God – Habakkuk asks if God plans to just let nations continue to eat each other up forever?

He then takes his stand at the watchtower, and he waits for the Lord to answer this second complaint.

The answer, again, is likely not what Habakkuk wanted to hear, but he is told to write down the answer and to make it easy to read on tablets.  He was to make it so big that a person running could read it.  Habakkuk might have even written the answer he received from the Lord on something very big like a giant billboard – that the person running by couldn’t miss even if he wanted to not see.

The answer God gives is simple, and it is two-fold – First, God says, “Be patient.”  God’s word is true – the world as it is now is not as God intended it to be; God is setting everything right, though his coming salvation and end to all evil seems very, very slow to us.

We struggle in understanding why he is delaying his salvation.  But… the second part of the answer is given to Habakkuk – “The righteous shall live by his faith.”

The person who lives by his faith in God and God’s Word is righteous before God.  The righteous are those who trust in God and his promises, patiently waiting for the Lord to bring about his salvation – in his chosen time and in his chosen way.

Unlike Habakkuk who lived before the coming of God’s promised savior, the Christ, we living in the New Testament era of the Church know our promised savior, Jesus of Nazareth.  We know how Jesus came to save us from evil – how he saved each and every one of us from evil.  He saved us from our own evil.

He saved us from our own sins.  Our sins deserve God’s eternal punishment.  Jesus saved us from the punishment we so rightly deserved by taking our sins upon himself, paying the penalty that we deserve through his death on the cross.

Jesus brought us from being enemies of God into being the children of God.

And through his resurrection from the dead, he has given us the assurance that our sins truly are forgiven and that he has all power over sin, death, and the devil, that at his promised return, he will put a final end to all evil in this world, in our lives – forever.  The wicked will no longer devour the righteous.  Nations will no longer continually eat each other up over and over and over again.

So we ask, like Habakkuk, when are you going to do this oh Lord?  When will Jesus return to do as he promised?

And the answer we get from the Lord is the same that Habakkuk received – “If it seems slow, wait for it; it will surely come; it will not delay.”

Peter at the end of his second letter tells us a very similar message to what Habakkuk received from the Lord.  In 2 Peter 3:9, Peter writes, “The Lord is not slow to fulfill his promise as some count slowness, but is patient toward you, not wishing that any should perish, but that all should reach repentance.”

He continues in verses 10 to 13, “But the day of the Lord will come like a thief, and then the heavens will pass away with a roar, and the heavenly bodies will be burned up and dissolved, and the earth and the works that are done on it will be exposed.  Since all these things are thus to be dissolved, what sort of people ought you to be in lives of holiness and godliness, waiting for and hastening the coming of the day of God, because of which the heavens will be set on fire and dissolved, and the heavenly bodies will melt as they burn! But according to his promise we are waiting for new heavens and a new earth in which righteousness dwells.”

God is not slow in keeping his promises to free us from all evil and suffering.  He is patient with us.  He desires for all to come to repentance.

Let me ask you, what would happen if Christ were to return today?  To return right now?

All who are not repentant, all who are not living by faith in Christ, will be lost to death forever along with everything else of this world that is destined for fire.

Who do you know that would be lost forever?  Do you really want God to put an end to all evil, right now, when you think of the ones you love who are not yet repentant of their sins?  Even those who have caused you evil would you really want that to be their fate?

What we perceive to be God’s lack of action in the problem of evil is actually patience that comes from his love for us – for you – for all people who are still outside of faith in Christ.  He does not want them to perish, though it is what they deserve, and that is what you deserve.

As he is patient with the wicked, he calls us, we who are righteous, not by any righteousness of our own, but by the righteousness we receive from Christ, through the faith by which we live, to be patient too.

So the problem of evil there is an answer – the answer is Jesus.

What is the greatest act of evil in the history of the world?  Many people typically will point to the acts of Hitler, or Stalin, or Mao Zedeng that led to the deaths of millions upon millions of people.

I’d point people however to the cross of Jesus.  The greatest act of evil that ever occurred in history has to be when Jesus, God in the flesh, innocent of any wrongdoing, was viciously beaten, whipped, and crucified at the hands of his sinful creation. Can anything more evil possibly happen than man killing God?

But what we see from the greatest act of evil is that the greatest good was produced: the forgiveness of all of our sins, the salvation of mankind. When Jesus allowed the greatest evil to be done to him and when God the Father offered his one and only son for us that we see the greatest love ever – God’s love.  And we see that God loves us.

When you face evil, remember Jesus and his love for you.

When you face evil, be patient and trust in the promises of God.  Pray and stand watch like Habakkuk.  Look for the return of Christ as Peter tells you to do.

Depending on what evil you have experienced or are experiencing, depending on what suffering you are enduring, such an answer may fail to cut the mustard.  If you attend the Sunday English Bible Study for Light of Christ, you’ll recognize that phrase “cut the mustard” from a couple of weeks ago.  It means that to be told to wait and trust in God when you are under attack by evil or when you are suffering in sorrow or pain will probably fail to satisfy your troubled heart and mind.

But nevertheless, when you stare evil in the face, remember the righteous shall live by his faith.  And it is through this faith that we live in holiness and godliness – as we wait for and speed the coming of the Day of the Lord.

And it is in that promised day of Christ’s return that Jesus will destroy sin, death, and the devil forever.