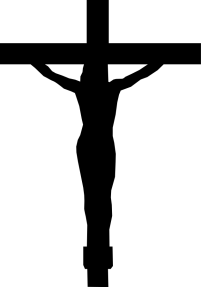 At least a few times a year I receive a question asking me why I chose to use a crucifix in my Contradict logo.  Protestant Christians sometimes avoid Contradict because to them the crucifix represents Roman Catholicism, a belief system that openly teaches that our works are involved in our salvation, a doctrine wholly opposed by the Reformation that led to the birth of Protestantism.

I come from a conservative Lutheran background theologically and am a member of the Lutheran Church – Missouri Synod.  I was never taught such a distinction concerning the use of a crucifix.  Lutheran churches I attend typically have a cross that does not have Jesus hanging on it, however, some congregations in my denomination do have Christ on the cross in their sanctuaries.  I hear that in Europe, it’s most likely that Lutheran churches will have a crucifix.

For Protestants and Roman Catholics who have the crucifix, it’s a reminder of what Christ suffered for us to pay for our sins.  It falls in line with what Paul said about resolving to only preach and know “Christ and him crucified.”  Of course Paul also explains that “Christ died for our sins, was buried, and raised on the third day.”  Roman Catholics and Protestants alike who display crucifixes instead of empty crosses, confess that Christ was also raised from the dead, and that in fact he is not suffering anymore!  Having Jesus on the cross in no way implies that he is still suffering, or is dead and still buried, just as an empty cross doesn’t signify that he is risen.

Here’s a quote from Luther and how he viewed the use of a crucifix:

“It was a good practice to hold a wooden crucifix before the eyes of the dying or to press it into their hands.40 This brought the suffering and death of Christ to mind and comforted the dying. But the others, who haughtily relied on their good works, entered a heaven that contained a sizzling fire. For they were drawn away from Christ and failed to impress His life-giving passion and death upon their hearts.”

As to my reasoning for picking a crucifix, I chose a crucifix to be used in the Contradict logo because it shows that Jesus died for our sins.  That message is not conveyed with the word Contradict, but with an image of Christ on the cross at the end of Contradict that message is more likely implied.  In our day and age, the cross has lost its punch.  Few people know how brutally torturous the cross was as an execution device. Having an image of Christ on the cross reminds us that the cross isn’t just a fashion symbol, or piece of jewelry, or an expression of art, which it has far too often become in our modern society.

I also don’t think many non-Christians are aware of a Roman Catholic and Protestant divide over the crucifix.  We are divided not over the use of a crucifix, or the message that it conveys that Christ died for our sins, but instead we are divided over the doctrines that the Roman Catholic Church has rejected, namely that we are saved solely by the work of Christ alone.    For those who are aware, or not aware, of this unnecessary divide, they will certainly see from the Contradict Movement website, my blog, Reconnect podcast, or YouTube channel, or my book, Contradict – They Can’t All Be True, that I am not teaching Roman Catholic doctrine.

I also like that the last image of Contradict is one of Christ dying for our sins.  All Protestants will confess that Christ’s death is central to the Gospel, as is the resurrection.  So I don’t see this image being counter to the message of Scripture, but instead a reminder of the depth of our depravity, that the Lord of heaven had to take on flesh in the person of Jesus Christ and bear the full weight of our sins through an agonizing death on the cross of Calvary in order that we might have forgiveness of sins.

Finally, and not as important as conveying that Christ paid for all of our sins, I think the crucifix is more aesthetically pleasing (artistic) in the Contradict logo than an empty cross.

7 thoughts on “Why did you use a crucifix in Contradict?”