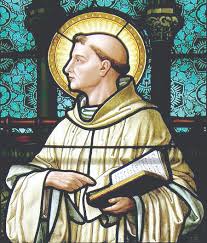 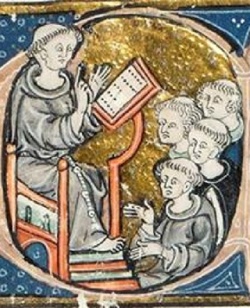 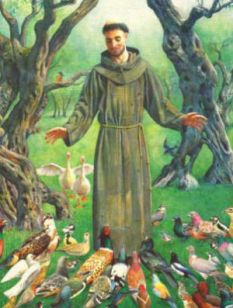 Italian-born, Anselm was a Benedictine monk and philosopher of great renowned and influence in the 11th century AD.   His life ended while holding the office of Archbishop of Canterbury in the first decade of the 12th century.  He is recognized as the father of Scholasticism, a philosophical movement that married theology and rational thought that emphasized the internal, logical consistency of the Christian faith through reasoned arguments and the presentation of succinct truth claims.  This school of thoughts was the model of learning in the first universities that were began to be established throughout the Holy Roman Empire during Anselm’s life.  A prolific writer of numerous dialogues and treaties, Anselm offered much to the theological discussion of his day, but his most recognized teachings are his satisfaction theory of atonement and his argument for the existence of God from reason alone, now known as the ontological argument.  The satisfaction theory for atonement stressed that Christ’s honor in his obedience to death won our salvation.  This theory’s emphasis was shifted by the reformers of the 16th century to the penal substitutionary theory of atonement that stressed that Jesus’ death was the penalty we deserved, instead of the honor that we cannot give.  His ontological argument shows the existence of God from reason alone, arguing that if it is possible for God to exist, then it follows logically that he does exist.  There are numerous premises in his argument that demonstrate God’s existence, forcing the atheist to demonstrate that it is impossible for God to exist in order to hold his position logically. Anselm’s influence and work in Scholasticism certainly helped pave the way for the reformers work in analyzing and systematizing the doctrines of the Bible, as well as helped pave the way for modern day Christian apologetics.

Peter was born in Lombard, a place in northwestern Italy, near the dawn of the 12th century AD.  He became a professor of theology in Notre Dame in 1135 and was later ordained as priest and became the bishop of Paris in 1159, a year before he died.  His most important work of historical significance is his four book commentary series, Sentences.  It was a compendium of commentaries from Church fathers on Scripture and various theological topics.  Many commentaries were also written on Peter’s commentary.  Sentences became the quintessential theological textbook of the medieval ages and was studied and quoted by such giants as Aquinas, William of Ockham, Martin Luther, and John Calvin, that came after Peter Lombard.

Bernard of Clairvaux was a French abbot of the 12th century AD (1090-1153).  Clairvaux was the name of a monastery Bernard founded in 1115, one of as many as 300 monasteries he is credited with founding. He constantly operated on a high level of church and worldly activities, penning the structure and code of the Knights Templar, being called upon to settle the dispute over who should be the succeeding pope after the death of Pope Honorius II, as well as having a major hand in influencing and rallying the Second Crusade.  His work was influential in the Reformation, and it is said that he was an early reformer himself, since Bernard spoke against the growing predisposition to rituals and the numerous sacraments within the Church.  He also has written statements that reformers later used to support the doctrines of imputed righteousness and salvation by faith alone apart from human merit.  Interestingly enough though, the Roman Catholic Church also quoted Bernard during the theological scuffles of the Reformation, because Bernard also supported the selling of indulgences and viewed Mary as the co-redeemer with Christ.  For modern day Christians, we most likely know of Bernard of Clairvaux through his epic hymn, “Oh Sacred Head Now Wounded.”

Francis was an Italian who lived from 1181 to 1226.  He is most known for his Franciscan Order, which is technically three orders; the Friars Minor, the Order of Poor Ladies (or Clares), and the Order of Brothers and Sisters of Penance.  The Franciscans who followed his order were known for their path of poverty; and with their chosen poverty they served those that were poor and sick.  The goal for Francis was the emulation of Jesus’ life – living as Christ lived.  He was through and through a Roman Catholic, though today he is still revered by Protestants that find Francis of Assisi’s life of self-denial and service to others as an ideal example of what it means to loving one’s neighbor.

John Duns Scotus is placed alongside Thomas Aquinus and William of Ockham as one of the master philosopher-theologians of the High Middle Ages.  He lived from 1266-1308, born in Scotland. Duns Scotus was a Franciscan.  By John Duns Scotus’ day Lombard’s Sentences was a launching pad for presenting one’s own thoughts or answers to problems and questions.  Dun Scotus’ commentary on Lombard’s work is entitled, Ordinatio, and it contains the philosophical views that Duns Scotus is most known for: univocity of being, formal distinction, and his metaphysical arguments for the existence of God.  Of importance for Roman Catholicism, Duns Scotus formulated and defended the doctrine of the Immaculate Conception, that teaches that Mary was born preserved from all stain of Original Sin.  This is now accepted doctrine of the Roman Catholic Church that even teaches today that Mary never died due to her never sinning at all in her life.