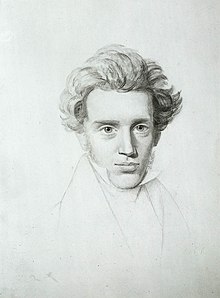 Soren Kierkegaard lived a short live in the first part of the nineteenth century.  He was born in Denmark in 1813 and died there in 1855.  In this lifetime, he was largely unknown to most of Europe and he only wrote in Danish, yet in the mid-twentieth century his writings became more influential.  His writing was too hard hitting against the culturally norms of his day and the church authorities and the state of Christendom to ever grow wings in his lifetime.  In writing his unpulled critiques against Hegel’s philosophy which emphasized the collective of the masses working together to usher in a better and better world and humanity, Kierkegaard focused on truth being found in the individual and even a questioning denial of one absolute dogmatic religious truth which later gave way to existentialism, a view that places existence over essence (Karr, 266).  The other element of his writings that stands out is his views that being Christian comes from being a contemporary with Christ in one’s own living.  This emphasis on Christian living gave way to another important, enduring teaching of his, which is that the Christianity of the New Testament no longer exists despite Denmark being a Christian nation!  Before Friedrich Nietzsche would write, “God is Dead” in the back half of the nineteenth century, Kierkegaard essentially proclaimed, “Christianity is Dead.”  It is on this last emphasis of his writings that his work, Christendom, falls. In an excerpt of that text entitled, “Whether Christianity Exists,” Kierkegaard lays out all the many reasons why the Christendom of his day in Denmark was not true Christianity.

Kierkegaard found himself in a “Christian nation,” Denmark.  But on close examination, he could not see what he thought was true Christianity, and Kierkegaard seemed think he was the only one with this realization, so he wrote to convince others of this with the aim to get people away from the worst of sins, hypocrisy, which is to say everyone in Denmark was just “playing Christianity.”  They were actors merely engaged in “Sunday Christianity.”  Sure, Denmark had the vast list of churches with all the great inventory that goes along with them: candles, bells, organs, sepulchers to the prophets, garnished tombs for the righteously departed in their communities, and of course a gang of priests to play the leads in this drama, but what was lacking was a true New Testament Christianity of the first century that saw a body of Christians denying themselves, shirking the world, and in fact dying from it.  Kierkegaard saw in himself and in his countrymen the opposite of that New Testament example; he saw an ever increasing value and seeking after the temporal joys of this earthly world in himself and others year after year.

Again, hypocrisy, is the root problem for Kierkegaard.  He saw that priests were living for the world in their vocations.  They were constantly seeking job raises and promotions within their profession. They weren’t denying the world or their earthly ambitions and desires as they were calling others to do.  The people showing up every week to church to hear such messages weren’t doing that either. Kierkegaard saw that people had compartmentalized their lives.  Sunday was for the Christian stuff and Monday through Saturday were for their earthly pursuits and passions.  The two were not in-synch with each other.  People were content with the numbers – everyone identifies as a Christian, so we must all be Christian.  People were content with their Christianity and thus were happy to live in the lie of being Christian, knowing in their heart of hearts, it wasn’t true Christianity; it wasn’t the true calling of Christ to his people, the true calling to pick up your cross and follow him, to partake in his suffering and death – now!
This message seems to ring very true of a good number of big name modern day church writers and speakers.  In particular, I’m thinking of Francis Chan and his book, Crazy Love, and Daivd Platt and his book, Radical – both authors are New York Times Bestsellers.  The following is part of the description of the book Radical found on the book’s website:

It’s easy for American Christians to forget how Jesus said his followers would actually live, what their new lifestyle would actually look like. They would, he said, leave behind security, money, convenience, even family for him. They would abandon everything for the gospel. They would take up their crosses daily . . . (radical.net)

The follow up question in the description is, “But who do you know that lives like that?  Do you?”  The answer is no one, except Platt is inviting you to live like that by committing to a one-year experience called the Radical Experiment.  Unlike Kierkegaard who said he and everyone in Denmark wasn’t a Christian based on the life Jesus called his disciples to live and so should stop being hypocrites, Platt says, “You can do it!”  And if one listens to Platt enough that doing is the sign that you are a true Christian.  It’s what can let you sleep at night, knowing that if you die before you wake, your soul God will take.

Francis Chan in his book, Crazy Love, start out well, proclaiming the “crazy love” that God has for us, but then the rest of the book is about how we should reciprocate that love by being “crazy in love” – or “radical” as Platt would label it.  Chan says that the term “lukewarm Christian” is an oxymoron, because we all know God spits out the lukewarm from the letter to the Laodiceans in Revelation.  When he describes the sorts of things Christians should be doing based on Jesus’ teachings or morality and generosity, for instance giving away your coat if you have two, we find that no one lives up.  Chan even admits at one point that we all have some elements in our lives that our lukewarm, but if that’s the case, then no one is a Christian since he says it’s an oxymoron to be a lukewarm Christian.  Chan is the worst at this sort of exhortation, because he also admits in his writings that he doesn’t want anyone to doubt their salvation who is lukewarm – too late Chan, I know someone who has doubted their salvation from reading your book.

It’s clear to me that what Kierkegaard and most recently Chan and Platt have written about concerning the Church by and large not looking like the Church in the New Testament Scriptures is for the most part true.  However, I think this shortcoming arises more when we focus on the book of Acts.  When we read the letters Paul and others wrote, we see that the churches in the first century had some rampant sins to be contested, such as the man who very knowingly by all in the community was having sex with his mother-in-law with no church discipline or repercussions.  All except one of the seven churches to receive letters in Revelation got chastised for their lack of works or zeal or misplaced trust in worldly possessions and remedies.  The author of the book of Hebrews had to even exhort the Christians to not give up meeting together as many were in the habit of doing.  Those first century Christians didn’t even have the excuse of being able to listen to the sermon online if they played hooky from the Sunday gathering.  For sure, we’re not all living the “radical” “sold out for Jesus” lifestyle, but we can’t all do that.  It’s not everyone’s calling. Someone needs to earn the money to be able to host the house church gatherings, someone needs to earn the money to sponsor the missionary journeys, someone needs to earn the money to feed the kids (the next generation of Church leadership).

The other large problem here is that Kierkegaard’s assessment is only valid for himself.  He cannot see into the hearts of the men and women he is judging.   If such New Testament living is the standard of being a Christian, then many of us are not saved.  Where would David or Solomon fit with this standard?  Where would the chief of all sinners, Paul, who did not do the good he desired to do, but instead did the evil he hated, stand before an almighty God?  Would they be called friend?  Will they receive the praise, “Well done, good and faithful servant?”  Will any of us? This leads to the biggest problem with this type of judgment, especially when shared completely void of the Gospel message: judging our salvation by our adherence to the Law of God is devastating to one’s faith in Christ.  It takes our trust off of Jesus Christ crucified.  Instead of boasting in Christ, we are turned inwards toward our own deeds.  We must point to our works to demonstrate our justifying love to God and our neighbor.  However, Scripture demonstrates that it’s from God’s love for humanity that he sent Christ who demonstrates that love for us by dying for all of our sins.  The penalty for all of our sins is paid in full.  That’s where our assurance of salvation comes, from an alien righteousness, a righteousness from outside ourselves that is imputed on us.  It is not an infused righteousness.